Those Kashmiri Pandits that Stayed Back or Returned…

However, some Kashmiri Pandits would not leave or would come back to the valley. These are their stories.

The teacher and his students: Neelkanth Raina was a school teacher who chose to stay back, despite the dire warnings from the Muslim fundamentalists. He was killed by his own students in cold blood while his neighbors assisted the killers in quickly escaping from the crime scene. The murder was meticulously planned and skillfully executed.

The Lab Assistant: Girija Kumari Tikoo was a laboratory assistant at a Government High School. She had already left the valley along with other Hindus in early 1990, and was living in a refugee settlement in the neighboring Jammu province. Hindus living in refugee settlements in their own country just because their Muslim neighbors would no longer want them in the neighborhood – ever heard of such a travesty of fate in any other part of the globe? She went back to the valley for a few days to collect her dues from the school never to return. On her way to the school, she was kidnapped by Muslim fundamentalists, gang-raped and sodomized before being cut into pieces in a sawmill. She was survived by a 4-year-old son and a 2-year daughter.

The Professor and his Wife: Professor K.L Ganju and his wife, Mrs. Prana Ganju were kidnapped along with their nephew. After showering bullets on the professor his body was quickly disposed of into the turbulent waters of the river Jhelum. Like in the movies, his nephew was given a choice – to jump into the river or watch his aunt’s modesty getting outraged, of which he took the first choice, and survived. Mrs. Ganju, she was gang raped, her breasts chopped off before she was killed.

If you dig into Kashmir’s history circa 1990 and the early 90s, there are hundreds of gruesome cases of terror and betrayal against resident Kashmiri Hindus to narrate. But, the cases of Neelkanth Raina, Girija Kumari Tikkoo and the Ganju couple drive home an important point.

All of them were killed after the Hindu community had already left.

These atrocities were thus a signal from the Muslim majority community to the exiled Hindus, never to even think of returning to their homeland.

Their houses had been occupied, their places were being renamed, Kashmir was no longer theirs.

Just as the dust of Hindu eviction from the valley was settling, it dawned upon the terrorist leadership of the Kashmir valley, their mentors in Pakistan and their apologists in the media all over the world that the public perception of the secessionist movement in Kashmir was getting damaged.

So, a narrative began to be promoted that the Indian government had conspired to get the Hindus evicted so that Indian security forces may freely oppress the Muslim population.

The religious terrorism of the Kashmiris underwent cosmetic surgery and began to be called a political struggle.

The underlying thought process actively promoted by Pakistan was – now that Kashmir has been cleansed of almost all traces of Hinduism from the valley, it is time to revert to the 1947 formula concocted by a consortium of power crazy megalomaniacs from the Muslim League, that every piece of land with Muslim domination, should secede to Pakistan.

To this day, Kashmir remains a religious and civilizational conflict. It has no political dimension except on the surface.

Kashmir and the Rest of India

The picture below shows how young women in Kashmir spend their day. Pelting stones at Indian security forces is the high point of their morning or afternoon. 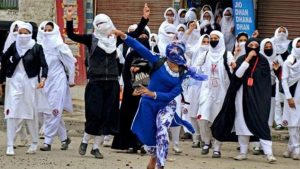 And this is how many young women in the rest of India spend their day. Bouncing ideas off each other during the lunch hour so they could crack that technical challenge they encountered during the morning. 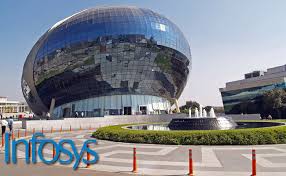 The above picture is from one of the campuses Infosys [6]has built across India. Infosys is the legendary Indian IT behemoth that was the first Indian company to be listed on the US NASDAQ in 1999.

I am not promoting Infosys, I have no personal interest in the company, but I have a point to make.

Q: Does Infosys have a campus in Kashmir?

Q: Why not? Wouldn’t young ladies in Kashmir want to switch the fun job of stone pelting with the more productive (and lucrative) job of code crunching on laptops?

A: They cannot, even if they wanted to.

A: Not a single IT company- Indian or multinational has a presence in Kashmir.

Q: I don’t get it! India is the 6th largest economy globally and is home to almost all the major IT corporations of the world. Some of them like Oracle Corporation have even built their largest Development Centers outside of the US, in Indian cities[7][8]. And then like Infosys and WIPRO, India has its own litany of indigenous IT companies and many fledgling start-ups spread across the land. Azim Premji[9][10], the Chairman of WIPRO and one of the richest men in the world (as of September 2019, he is 36th on the Forbes list of billionaires [11]) – is a Muslim himself! Then why have these IT business houses and their tycoons ignored the state of Jammu and Kashmir?

A: Well, their hands are tied. The special status provided to Jammu and Kashmir by Articles 370 and 35A ensures that non Kashmiris cannot buy land in Kashmir. So long as Kashmir is “protected” by its special status within the gilded cage of Article 370 and 35A, there is virtually nothing that someone even as powerful as Azim Premji can do.

Arun Jaitly[12] held cabinet positions as Minister of Finance, Minister of Corporate Affairs and Minister of Defence in the Narendra Modi government. As a former lawyer of the Supreme Court of India, he was regarded across the nation and even internationally as one of the finest minds in India’s corridors of power. He passed away on 24th August 2019[13][14] (just 19 days after Article 370 was abrogated by his government).

In a blog post titled “How Article 35A hurt the people of Jammu & Kashmir“, Arun Jaitley wrote the following.

“The State does not have adequate financial resources. Its ability to raise more has been crippled by Article 35A. No investor is willing to set up an industry, hotel, private educational institutions or private hospitals since he can neither buy land or property nor can his executives do so. Their ward cannot get government jobs or admission to colleges (as they are not Kashmiris). Today, there are no major national or international chains that have set up a hotel in a tourism centric State. This prevents enrichment, resource generation, and job creation. (Kashmiri) Students have to travel all over, including Nepal and Bangladesh, to get college admissions. Engineering colleges and hospitals, including super-speciality facility set up by Central Government in Jammu are lying under-utilized or unutilized since Professors and Doctors from outside are unwilling to go there. Article 35A has prevented investment and dismantled the State’s economy.”

“Article 35A, which is constitutionally vulnerable, is used as a political shield by many but it hurt the common citizen of the State the most. It denied them a booming economy, economic activity and jobs.”

“The historic blunders of special status under Article 370 and Article 35A had cost the country both politically and financially.”

In one of his last comments after the abrogation of Article 370, Jaitley said – “Article 370 invoked the separate status that led to separatism (in Jammu and Kashmir). No dynamic nation could allow this situation to continue.”

With the revocation of Article 370 “A historical wrong has been undone today. Article 35A came through the back door without following the procedure under Article 368 of the Constitution of India. It had to go.”

“The decision of the government will help the people of Jammu and Kashmir the most. More investment, more industry, more private educational institutions, more jobs and more revenue will come,” he said, adding that “Kashmir’s regional leaders now feel they would not be able to whip up the fake issue of ‘sentiment versus benefit‘.”

Sentiment versus benefit, and economic, educational and financial benefits to be precise. Let’s chew on that for a moment, and when we start drawing on the juice on that thought, we should think it through.

For those of us here in the US, consider a hypothetical situation to understand what Arun Jaitley means. Say, for example, I was born into a Hispanic family in California in the year 2000. In the year 2014, the population of Hispanics officially surpassed that of Whites in California. I am now a teenager dreaming of growing up and going to Stanford or UC Berkeley (just examples) for my college education, and later getting hired by Google or Facebook or any of the tech giants in California’s Silicon Valley. In effect, I have bright visions of my future as I see it playing out in my very own state, an economically vibrant part of the world.

Now, a charismatic leader rises up in neighboring Mexico and starts a rant for the separation of California as a state from the US and its accession to Mexico, on the basis of an ever-growing Hispanic majority in California.

Should I be thrilled with that?

[13] Arun Jaitley: A Politician and a Gentleman

Explained: What are Articles 370 and 35A? Why they are important for J&K

Exodus of Kashmiri Pandits: What happened on January 19, 26 years ago?

The Rule of Law and the State of Jammu & Kashmir 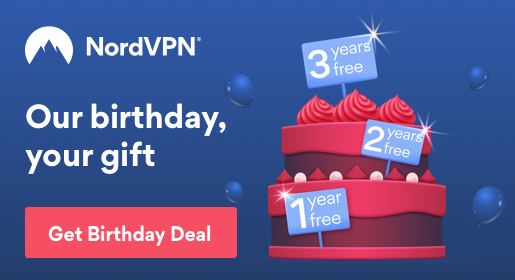 Next You Love To Hate? Welcome to explicitfacts.com- This is...